We would like to offer our sincere support to anyone coping with grief. Enter your email below for our complimentary daily grief messages. Messages run for up to one year and you can stop at any time. Your email will not be used for any other purpose.

Share a memory
Obituary & Services
Tribute Wall
Read more about the life story of Robert and share your memory.

Robert James Burns, passed away January 17th, 2023 surrounded by his loving family. He was 91 years old.  Robert, fondly known as Bobby, was born to William and Florence Burns on May 10, 1931 in Spokane, Washington.  While Bobby left us today to be with the Lord, he left behind a true example of how to live a good, faith filled life. He was a man full of grace and dignity who impacted the lives he touched.

Today we lost an amazing husband, father and papa.  Dad was a man of deep faith, strong character and humility and always made those around him his priority. He was a kind man who loved people; quick with a smile, hug and even a joke.  If he met you only once, he would never forget your name and you were his friend for life.  He was genuine in his friendships and treasured them until the end. He would always be there in your time of need. He was a father and papa that truly supported his children and grandchildren in every aspect of their lives; always in a positive, loving manner.  He loved nothing more than watching his grandchildren play their sports and activities.

Dad was a talented athlete who played basketball and baseball for the Gonzaga University Bulldogs, a team that he held close to his heart until the end.  He also played basketball and baseball for the army while he served. Later in life he took up tennis and golf which kept him active with his dear friends.  Dad was committed to his faith and service. He attended daily mass and deeply believed that you leave a community better than you found it. He worked in the food bank and volunteered endlessly at St. Charles Borromeo Catholic School and Church.

We would like to thank our caregivers Faith and Mary, true angels from God, who have become part of our family and cared for Mom and Dad like their own.  We would also like to thank Tina and Angela from MulitCare Home Health & Hospice for their kind, loving support throughout this long journey.  Our family is truly grateful and indebted to you all.

In lieu of flowers,  the family asks that any charitable donations be made, in the name of Robert Burns, to the Father Gerry Chapdelaine Endowment Fund at Bellarmine Preparatory High School, the O’Dea Fund at O’Dea High School or MultiCare Home Health & Hospice.

To send flowers to the family or plant a tree in memory of Robert James Burns, please visit our floral store. 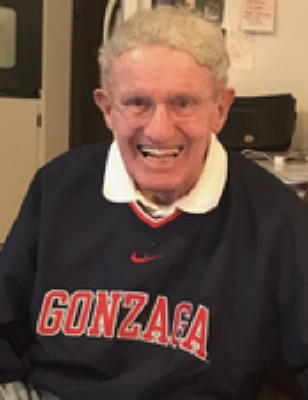 In Loving Memory Of

Look inside to read what others
have shared
Family and friends are coming together online to create a special keepsake. Every memory left on the online obituary will be automatically included in the book.

In Loving Memory Of

Look inside to read what others have shared

Family and friends are coming together online to create a special keepsake. Every memory left on the online obituary will be automatically included in the book.

You can still show your support by sending flowers directly to the family, or by planting a memorial tree in the memory of Robert James Burns
SHARE OBITUARY
© 2023 Gaffney Funeral Home. All Rights Reserved. Funeral Home website by CFS & TA | Terms of Use | Privacy Policy | Accessibility