Plant a tree in memory of Dorothy
An environmentally-friendly option 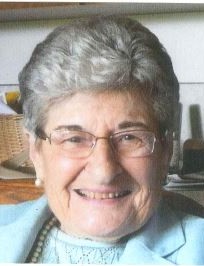 Dorothy Edith (Canale Johnson) Amrein peacefully passed away in her sleep on March 11, 2021, in Milton, WA shortly after her 98th birthday.  She will be remembered for a life fully lived, both in good times and bad, and the kindness, generosity, support, respect, and love she showered on all her family, her friends, and anyone she became acquainted with during her long life.

Dorothy, known as Dottie to her friends, was born in Tacoma, WA on February 18, 1923, to Giulio and Guiseppina Canale, two recent Italian immigrants seeking a better life and better opportunities for their family in America.  Dorothy and her parents resided their entire lives in the Fife-Milton area, with her father working all his life as a farm laborer at Colonial Gardens until it was sold for construction of I-5 through Fife.  When Dorothy was ready and anxious to start her schooling in 1st grade in the Fife school system, she was initially sent home because she could not speak English.  Disappointed, but showing the determination and grit she demonstrated throughout her life, she learned to speak English from a young girl she played with, Bev Walsh, and then spent all of her school years in the Fife school system.  Only months after the USA entered WWII after the Pearl Harbor bombing, she graduated from Fife High School, at a time when many of her high school friends and their families of Japanese descent were being rounded up and interned.  She dealt with this injustice by visiting and giving comfort to her friends at the internment camp set up on the Puyallup fairgrounds.  That just exemplified the kindness, respect, dignity and compassion she showed everyone she encountered throughout her lifetime.

After the war ended, Dorothy married Victor Eugene (Pinkie) Johnson and started raising a family of three boys, Lee (1948), Larry (1951), and Bob (1952) in Fife.  Like her,  they all attended and graduated from the Fife school system.  During her working years, Dorothy worked at the Pick Quick Drive-In, at the Fife Drive-In Theater, at farms in Fife picking beans and peas, as a bank teller, as a secretary at Fife High School to the guidance counselor and the principal, and finally as a clerk in the Pierce County Auditor’s office.  She was an active volunteer and participant in many community and school events and activities, including the Fife Lions Club, the Swiss Ladies Society and St. Martin of Tours Catholic Church for which she was a lifelong parishioner and member.

Tragedy struck Dorothy in 1967 with the passing of her husband at a time when one son was in college and two attending Fife High and Fife Jr. High Schools.  The next decade was difficult for Dorothy with her sons off to college and providing care to her elderly parents who also passed away during this time.  She continued to have the faith and determination to keep moving forward.  Dorothy then met and married Werner Amrein in 1979, and they were able to share their senior years with lots of dancing, traveling throughout the world, wintering in Apache Junction AZ and spreading their love with both hers and Werner’s beautiful grandchildren and great-grandchildren.  These twilight years of her life with Werner were good years for Dorothy, until he passed away in 2014.

Family was everything for Dorothy and she never missed sharing a birthday, an anniversary, a holiday, or a special event in the lives of the family that she gave all her love.  The little Italian girl who was sent home from first grade because she could not speak English never gave up and eventually was responsible for bringing into the world and making the lives better for 21 new Americans.  Dorothy is survived by her three sons who knew her as “Mom” – Lee, Larry, and Robert (Bob) Johnson; her six grandchildren who knew her as “Grandma” – Brian Johnson, Tiffany Lee, Scott Johnson, Jeremy Johnson, Anthony (Tony) Johnson, and Leesa Schlichtman; and her twelve great-grandchildren who knew her as “Nonna” – Destry (13) and Davis (10) Lee, Stella (9), Mason (6), and Cash (3) Johnson, Tucker (5), Hannah (3) and Kaleigh (3) Johnson, Ethan (5) and Spencer (3) Johnson, and Beckham (1) and Calvin (coming in July!) Schlichtman.

She was so proud of and loved with all her heart and soul each of hers and Werner’s progeny, and they each loved her back.  Dorothy cherished and lived for the moments she could share with each of them, and all of our lives have been permanently enriched because we have been fortunate to share our lives with Mom, Grandma, and Nonna.  Although she will be dearly missed, she will live forever in our hearts and our memories. Mom, Grandma, Nonna – may you forever rest in peace.

Plant a tree in memory of Dorothy by clicking here.
To send flowers to Dorothy's family, please visit our floral store.

Plant a tree in memory of Dorothy
An environmentally-friendly option

Plant a tree in memory of Dorothy

7 trees planted in memory of Dorothy

We'll always remember Dorothy, a great friend and loving person. She touched the lives of everyone who knew her. We’re grateful for the times we shared with her. Thank you for sharing her story.
The Frank Schnider Family

I first met Dorothy when I pastored a church in University Place, WA 17 years ago. She often came in support of her son, Bob, who sang at the church. From there I was fortunate to meet many in her family as well. Dorothy was so special. I loved her spunk. Despite her age, she just kept going. She was amazingly consistent. What you saw was what you got. She seemed to always have a smile, an encouraging word, and a hug around the neck. To say that I loved Dorothy is an understatement. I absolutely adored her. I honor her life. Well done. Rest In Peace.

I was her mail lady for a long time!! Shell be missed. Sweetest lady ever!!

I am so sorry for the loss of your dear mother. My dad truly loved and admired Dorothy not only for her efficiency and work ethic, but also for her dedication to her family and community. We are all better off for having known Dorothy. She will be truly missed.

Please know that our thoughts and prayers are with all of you at this most difficult time. Dorothy will be dearly missed by all of us who were fortunate to know her.
Our deepest sympathy.
Lou and Sandi Ulrich

A Memorial Tree was ordered in memory of Dorothy Amrein by Lou and Sandi Ulrich.  Plant a Tree

Plant a tree in memory of Dorothy